Edit
watch 01:25
Jurassic World: Dominion Dominates Fandom Wikis - The Loop
Do you like this video?
Play Sound
This article is a stub. You can help Terra Battle 2 Wiki by expanding it.

Heart and Soul is the seventh chapter in Terra Battle 2 Story. It features Earth enemies of Insect and Plant races. Some enemies can inflict Blind and Paralysis Statuses. 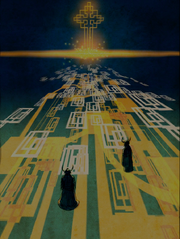 Tinged with an almost searing heat,

It flowed into the fallen El and Gl.

It was a voice they hadn’t heard in years.

Before her, there was nothing…

They looked at each other with fresh eyes.

In the depths of their cold bodies 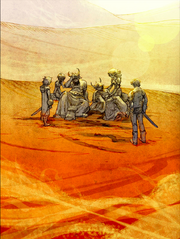 Ganah: What th--did you two hit your heads on something during the escape? You don’t sound like… yourselves.

Gl: Speakin’ of fried, think we can fry an egg on this thing? I’ll give ya first dibs, big sis!

Gl (with El’s image?): Yea, that’s what living’s all about, right? Family? Blood’s thicker than water, and all that!

Ganah: Ugh… Putting these two jokers aside for a moment, where are we…?

Kukurakan: I was hoping you’d be able to answer that. Doesn’t look familiar, huh?

Cynthia: We’ve seen every corner of our continent and have never once found a desert. Meaning wherever we are is far, far from home.

Nene: No way… How are we gonna get to the Forbidden Valley now?

Ganah: I understand that you want to find your friends, but you’ll never save them if you prioritize their safety over your own.

Kukurakan: We can’t afford to take our time…

Cynthia: Dare I hope that you two know how to get out of here?

Gl: Alls we know is we can’t stay. Way too dangerous.

El: And too damn hot!

Ganah: Well, I can’t argue with either point. The temperature will come down in the evening, but we should at least find a safe place to make camp.

Nene: Imagine if we stumbled upon an oasis! That’d be exciting! 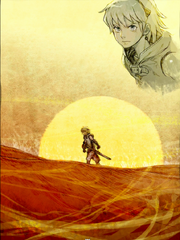 What the hell am I doing…?

Weren’t we just looking for Sarah?

We don’t have time to screw around in this wasteland. She still needs us.

Why can’t anyone else see that…?

“Even the great Ganah gets scared now and then.”

You’d know better than anyone,

“What he’s really afraid of, though, is losing someone.”

Then why can’t he see how much I don’t want to lose Sarah…?

El and Gl want to find her, too.

From the little they revealed,

That much is clear.

But what could two Sais

Ganah: Pretty, huh? Looks more creepy if you ask me.

Cynthia: It’s as if the grains of light are alive. Don’t they remind you of fireflies?

Kukurakan: Hey, El, Gl… If you don’t mind my asking, what do you know about Sarah?

Gl: We’ve never met her in person, but… it feels like there’s a little part of her buried deep inside each of us.

Ganah: Huh… so it’s not like you’re close friends or anything.

El: Nope. But we still wanna meet her.

Nene: Are you alright?

Cynthia: Let’s focus on finding a safe place to stay. The sooner we do that, the sooner we can resume the search for Sarah. Right, Kukurakan?

Ganah: Well, I’ll be… would you look at that! An oasis, just like Nene said.

Cynthia: We won’t find a better place to make camp than this. Come, help clear a spot for the tents.

Gl: I’ll get the marshmallows!

Ganah: That’s right. I’ve got an important job to entrust to the three of you.

Ganah: I need you to… well, scrounge up some food for tonight’s meal.

Kukurakan: ...You’re telling us to forage.

Ganah: Time to test those survival skills, kid. We’re not getting anywhere without food and water. Just so happens that both can be found in the cacti around here… look for the fleshy ones.

Ganah: What, you’ve never had a prickly pear? They’re not bad once you get the spines off ‘em. Anyway, I’ll keep watch over the camp. Good luck.

Gl: Looks juicy even from here…

Gl: I second that vote, my man!

Kukurakan: Come on, guys. Just grab what you can carry and let’s go. The others are waiting.

El: But it looks so good… and besides, it’s two votes to one…

Kukurakan: Don’t give me that! What do you think this is, a buffet? We’re wasting time!

Kukurakan: How about you think about what others want for once? About how they feel? You CAN feel, right, you hunks of junk?!

(El and Gl are taken by Giant Sand Worm.)

(Giant Sand Worm sucks El and Gl into the sand.)

Kukurakan: Damn it! Not again… not again…

Kukurakan: I’d better get back. The others need to know…

Ganah: What’s with the long face? Well… We can hear about it after the jokers arrive.

Nene: They were EATEN?! By a sand worm? How terrible… I can’t imagine a fate worse than that…

Ganah: Those things really will eat anything.

Kukurakan: It’s… my fault. I ran ahead and they tried to save me, even after I said all of those horrible things…

Ganah: If anyone’s at fault, it’s me. I was the one who sent you three out into that blasted wasteland, after all.

Kukurakan: But… but… if I was stronger, then-- 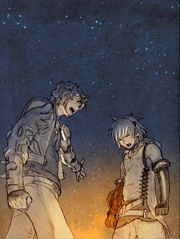 Ganah: Kid, if you wanna fight, you’re gonna have to accept the reality that death comes for us all sooner or later.

Nene: Ganah, is that really the best way to put it…?

Ganah: Maybe, maybe not… but it’s the truth. You can spend your whole bloody life wondering “what if,” but that won’t bring anyone back.

Kukurakan: You think I’m a weakling, is that it? That I turned tail and left them to die out there?!

Ganah: If believing that makes you feel better, then believe it all you want!

Ganah: I don’t like guys who are all talk.

Kukurakan: Say that again! I dare you!

Cynthia: I said enough! Listen to me, both of you. There may still be time to save them, if you’re willing to put off tearing out each other’s throats.

Nene: You’ve got a plan, Cynthia?

Cynthia; It’s not a sure thing, but I’ve heard that sand worms have a tendency to store their prey away in their nests for safekeeping before eating them.

Nene: Then there’s still a chance that El and Gl are alive!

Cynthia; There is… but it’s not like the sand worms are just going to let us waltz in and ruin their dinner.

Kukurakan: I… I think I know where the nest is. There may even be some tracks left if we hurry.

Nene: I understand the need for urgency, but it’s pitch black out there.

Kukurakan: Every second we wait here is a second closer that El and Gl come to being worm food!

Cynthia: Those boys are something else.

Nene: You handled that well, you know?

Cynthia: Oh, it was nothing. I’ve had a lot of practice after all. More than ever, the Kukurakan I saw tonight reminded me of…

Nene: Reminded you of…?

Cynthia: ...Ganah in his youth.

Nene: Is that so…

Kukurakan: This is it, it has to be! The sand worm nest!

Kukurakan: This isn’t right… The one who attacked El and Gl was much bigger than these runts…

Cynthia: Some sand worm colonies are ruled by a queen. If she’s the one who did it, then these must be her guards.

Ganah: Let’s make our way up the food chain, then…

Kukurakan: There! That’s the one!

(El and Gl emerge from the sand.)

Gl: Breathe in, breathe out, breathe--

Cynthia: Everything still intact? Good. I’m glad that we made it in time.

Nene: You two did well to survive this long.

El: Felt like I died over and over again…

Gl : We DIDN’T die over and over again?

Ganah: Right, well, you’re safe and sound for now, so let’s be satisfied with that.

Ganah: Looks like this nest was on the edge of the desert. Shouldn’t be too hard to get out from here.

El: Lemme make sure I’m in one piece…

Cynthia: If we’ve come this far, then there’s not much point in returning to camp. Let’s push ahead.

What will become of us, I wonder?

Sarah’s absence is starting to affect Kukurakan’s judgment in the worst way.

His frustration with the search’s failure ended up putting new friends in danger,

but everyone came together and saved the day in the end.

Kukurakan is quick to crack a smile,

but deadly serious when threatened.

Mess with his friends,

and you mess with him.

We can’t let him do all the work alone, though.