Among the Ancients is the ninth chapter in Terra Battle 2 Story. 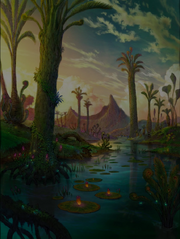 Beyond the Thicket of Twisted Tales, the air grew dense with condensation as grassland gave way to marshland.

Otherworldly noises echoed from the farthest reaches of the fetid swamp. Insects chirped, avians squawked, something rustled just out of sight… Around creepy crawlies the size of my hand, I kept eyes and ears open.

This place wasn’t like any marsh I’d ever seen… or for that matter, heard.

First a desert, then a thicket, now a marsh… are we really any closer to Sarah after all this traipsing around?

Cynthia: No, it’s more like… a vibration. There’s a distinct two-beat rhythm to it, and it’s getting stronger. That can only mean-- 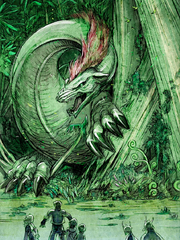 Gl: Can we fight something that’s our own size, just for once?! 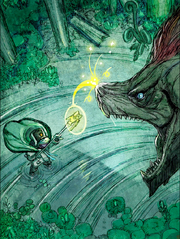 Ganah: What was that all about…? 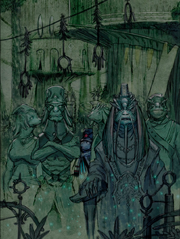 Was the right word?

Before us stood what I could only assume to be lizardfolk--as tall as a man, but with entirely different features.

Naturally, the villager who stepped forward was their leader. He had a face etched by decades of hardship, yet still retained a twinkle in his eye. After he spoke, the others drew closer.

“I’ve only read about humans in books. To think I can see one in the flesh…”

“Never expected to meet one of them in my lifetime.”

“Well, they must be pretty strong to have found their way here, at least.”

The lizardfolk eyed us with a mixture of curiosity and amazement.

Ganah approached the elder, and the two exchanged words.

“What is this place?”

“How shall I put it… would you understand if I said it was like the world your ancestors inhabited billions of years ago?”

“Was that ‘billions,’ with a ‘b?’ but that would go all the way back to the age of the dinosaurs…”

“Ah! I see the young lady knows her history. And you two, have you grasped the meaning of my words?”

Judging by El and Gl’s blank stares, the elder already knew the answer to that question.

“In any case, I will keep you no longer. Do be careful not to get lost in this marsh. Our adventure ends here, but I reckon yours still has quite a ways to go.”

As the elder turned and left, the others followed suit, and soon it was as if we had never even met.

Ganah: Damn. I had hoped to at least gain some actionable intel from him…

Ganah: No point in staying if they don’t want to talk. Just keep your eyes and ears open. Anything could be lurking in this mire.

(Piz’fa trembles and backs up.)

Ganah: What’s gotten him so worked up?

Ganah: Taking you back to your village, for starters. This is no place for a kid.

???: That dino scare tha sense outta ya? Gonna take a lot more than that ta frighten tha likes’a ME!

Cynthia: Ganah… I dare say that this “kid” just saved our hides. Thank you for your aid, young mage.

???: But what am I sayin’? Ya didn’t come here ta get all friendly with the lizard-folk, didja? Ya jus’ wanna know that fastest way outta here, eh, old man?

Cynthia: He’s talking about you, dear.

Kukurakan: Wait, how can light be black?

Piz’fa: Oof… that one smarts…

Nene: Should we rest for a bit?

Kukurakan: No way… the wound closed!

Piz’fa: That a scratch on yer cheek? C’mere, I’ll fix ya up in a jiffy.

(Piz’fa leaves the party in the dust again.)

(The party approaches the orb.)

Kukurakan: Is that the orb?

Piz’fa: Orb, ball, sphere, whatever ya wanna call it. See? Jet-black, jus’ like I said.

El: No. It’s darker than black.

Gl: Not bright at all.

Nene: Hey, Kukurakan… any idea what those two are talking about?

Kukurakan: Not a clue. Sometimes they talk as if they’re off in their own little world…

(Piz’fa shoots magic at the orb.)

Kukurakan: Did that… do anything?

Ganah: Hmm… doing the same thing over and over again, but expecting different results… what’s that called, again?

Piz’fa: Tch… doubt me if ya want, but I know what I read. The village’s manuscript was crystal-clear: this here orb can connect ta other worlds. Even yers!

Cynthia: That’s quite the revelation. Tell me, exactly what did this manuscript say?

Piz’fa: Minor details ain’t what matter, lady! We ain’t gettin’ anywhere unless this stupid orb starts hummin’... and fer that, it needs a ton’a magical juice!

Piz’fa: (Yeesh, these humans sure love ta ask questions. So what if tha manuscript said, “Keep away from tha Beyond at all costs?” So what if a buncha other villagers have disappeared? Don’t change tha fact that I gotta get there!) 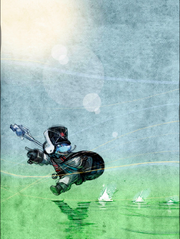 I know yer out there somewhere.

The villagers may have given up hope of findin’ ya, but I never will. Mark my words, I never will!

They say a search of the dinosaur nest turned up a whole lotta nothin’. Not even a trace of yer gear… but ya know what? That’s a good thing. Means ya got away unscathed.

These guys, they’re a sign… timin’ can’t be a coincidence. Buncha wanderers show up right after ya disappear… ya want me ta follow ‘em, don’t ya? 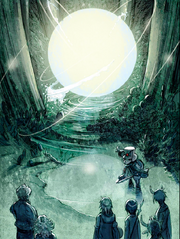 Ganah: Is this our ticket home? (What do you think, Ganah?)

Piz’fa: Bingo! Y’know, yer lucky ta have an Archmagus on yer side. Ain’t nothin’ that Piz’fa the Phenomenal can’t do!